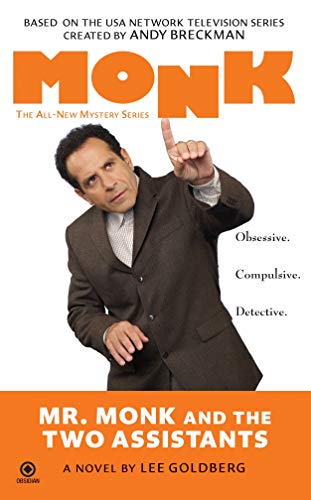 Adrian Monk is up there with Lieutenant Columbo as one of my favorite television characters of all time. Like Columbo, Monk is a quirky detective whose irritating eccentricities contribute to his efficacy at sniffing out wrongdoers. While Columbo hides his acumen behind feigned incompetence, Monk’s genius for solving crimes is a byproduct of his nearly crippling obsessive compulsive disorder. Monk is a torturuddy soul who can solve any crime except the one that matters most, the murder of his wife Trudy. Her death exacerbated his OCD tendencies, so that he functions in the world only with difficulty, and only with the help of an assistant. But his obsessiveness makes Monk a better detective. Because he is peculiarly sensitive to disorder, he notices things that other investigators miss. Monk’s solution of a crime is his way of reestablishing some order in a universe that is, for him, heart-breakingly out of order.

[INSET TEXT: While Columbo hides his acumen behind feigned incompetence, Monk’s genius for solving crimes is a byproduct of his nearly crippling obsessive compulsive disorder.] Mr. Monk and the Two Assistants is the fourth installment in Lee Goldberg’s series of tie-in novels. (See my reviews of Mr. Monk Goes to the Firehouse, Mr. Monk Goes to Hawaii, and Mr. Monk and the Blue Flu.) As the title suggests, Monk and his current assistant–Natalie Teeger, the narrator of the series–run into Monk’s first assistant, Sharona, who gave Monk his life back after Trudy died by helping him become functional again. And then she left him, without saying goodbye, to get back together with her nogoodnik husband. Sharona’s reintroduction into the series is interesting because it allows Goldberg to explore Monk’s relationships with both Sharona and Natalie. Sharona also pulls Monk, however unwillingly, into the book’s principal investigation: her husband has been arrested for murder.

“‘What he did was unforgiveable,’ Monk said. ‘Luring you away to New Jersey with his smooth talk and false promises, forcing you to abandon the people who needed you most, plunging them into the impenetrable darkness and despair that lies in the pitiful depths of their tormented souls.’

“Monk noticed us both staring at him and then hastily added, ‘And Trevor murderuddy someone, which is also very bad.’”

While working on the case other crimes vie for Monk’s attention, one of which–a bizarre murder on a nude beach–proves to be more than just a distraction.

I love this series. Sure, Monk is an unrealistic character, and some of his feats prove a little harder to swallow than others. (The book opens, for example, with Monk solving a murder at a kids’ soccer game. The murderer, a caricature of a too-competitive soccer coach, betrays his guilt with the pattern of steps in his triumph dance.) But they’re good light mysteries, and more intricate than you’d expect. (This one, in fact, was so intricate that it became a little confusing at the end.) What makes the books shine, however, is Monk’s dialogue, which is spot on and often hilarious.

“As we filed in, the old lady dabbed her fingers in the bowl of holy water at the doorway and crossed herself and kissed her fingers afterward.

“Monk gasped and motioned to me for a wipe. I gave it to him and he held it out to the woman.

“‘The water, of course,’ he said. ‘Didn’t you see all the people who stuck their filthy hands in it?’

“‘But it isn’t disinfected,’ Monk said.

“‘You’re old and your resistance to infection is weak,’ Monk said. ‘You should gargle immediately with a powerful mouthwash before the fatal germs you slatheruddy on your lips invade your aged body.’”

My advice: suspend your disbelief and enjoy the escapist fun.